The Healthy School Community Committee (HSCC) is a collective of several community service organizations who work collaboratively to augment learning opportunities in the Musquodoboit Rural High School (MRHS). In 2017, the HSCC surveyed local youth to find out what they were interested in learning and experiencing. A bit to the surprise of the HSCC, survey results highlighted a desire for practical cooking skills. This was the seed behind the HSCCs birth of the Thoughtful Food Project (TFP) in 2018.

The Birth of Thoughtful Food Project

Like an octopus, the Thoughtful Food Project began to tackle multiple dimensions of food literacy & food security with many project arms. We not only set out to mitigate a serious regional issue of food security and omnipresent lack of literacy, but also the social isolation often felt by youth and elders alike. A wise Paster on the HSCC team taught us just how prevalent and surprisingly similar these two demographics experienced the emotional dimensions of isolation. Therefore, one of the very first undertakings of the TFP was the initiation of Community Meals in MRHS. 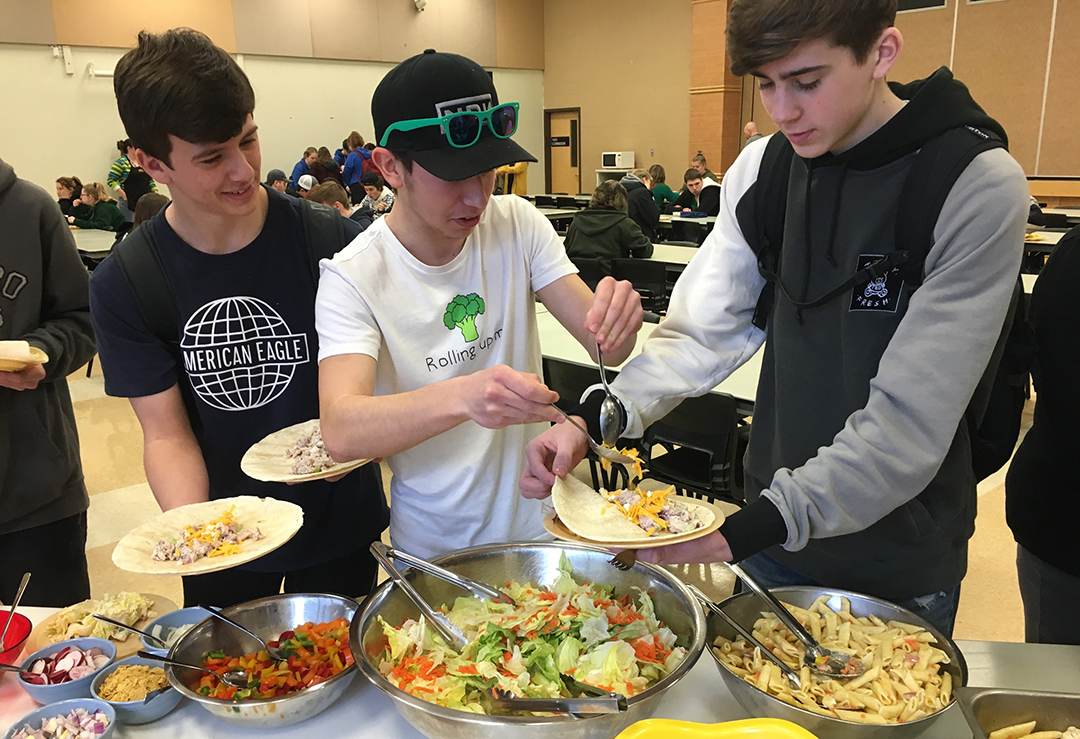 The Magic of Community Meals

Community Meals in MRHS began when the cafeteria was still dark; it had not been operational for years other than a few special events, a modest breakfast program kept alive by a keen Vice Principal, and the sale of soda and treats that would not rank on the Canadian Food Guide. So into the cafeteria went volunteers of all ages brought together by TFP to cook elbow to elbow, with students in the school. We did this once every month for the 2018-2019 school year. The Vice Principal arranged for a different grade to be involved each month. As well, twice we brought in professional chefs to also cook with the kids. And…the meal was free for all students and staff. Plus…we invited area elders to join us for the meal. Rides were offered to the elders to bring them to the school. When they arrived they were met at the door and hosted by appointed students, served their meals by other students, and hugged by any possible relations and their friends. These meals literally changed the culture of the school. Within that same year, a full-time cafeteria manager was hired so that lunches could become available every day and the breakfast program improved. We made huge strides. Now it was time to improve our infrastructure. 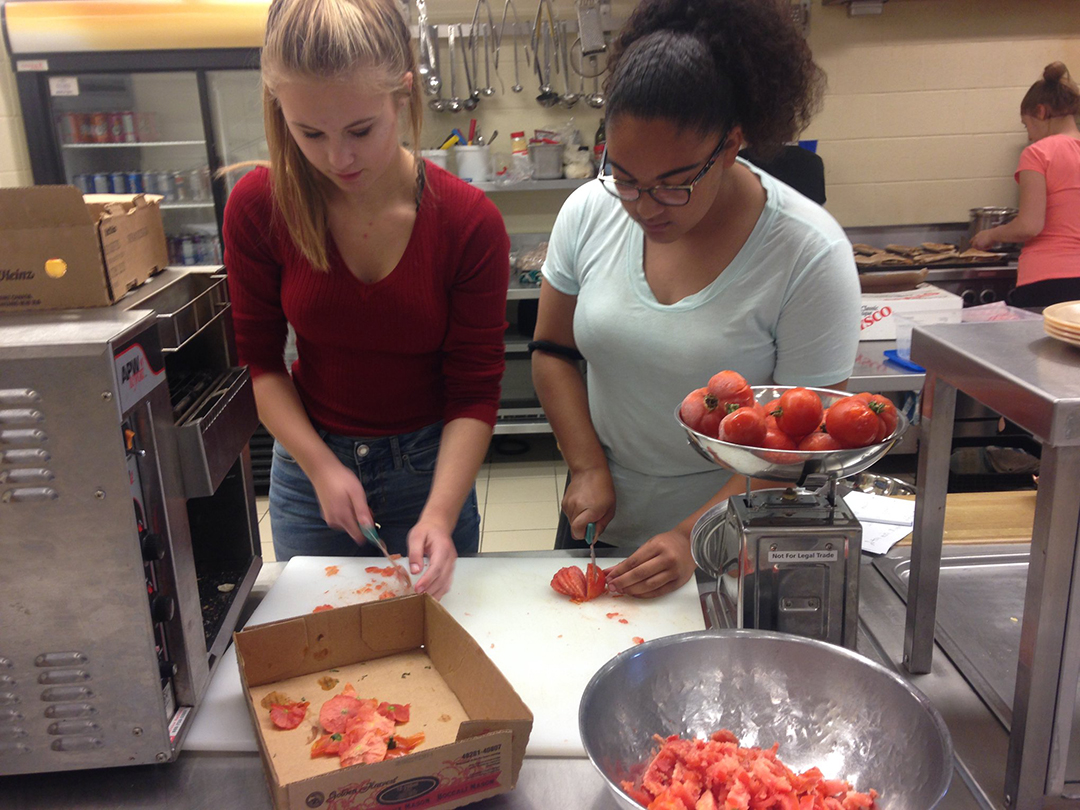 The Farm to Cafeteria grant made it possible for us to replace the cafeteria’s knives (if you can even call them knives!) and buy a salad bar. We had been setting out food in big serving bowls on cafeteria tables and thus treating the tables as salad bars because we didn’t have the real deal. Now, the salad bar is used every day the cafeteria is open (covid caused long closures). The cafeteria manager began to use it daily for the breakfast program then again for lunch. 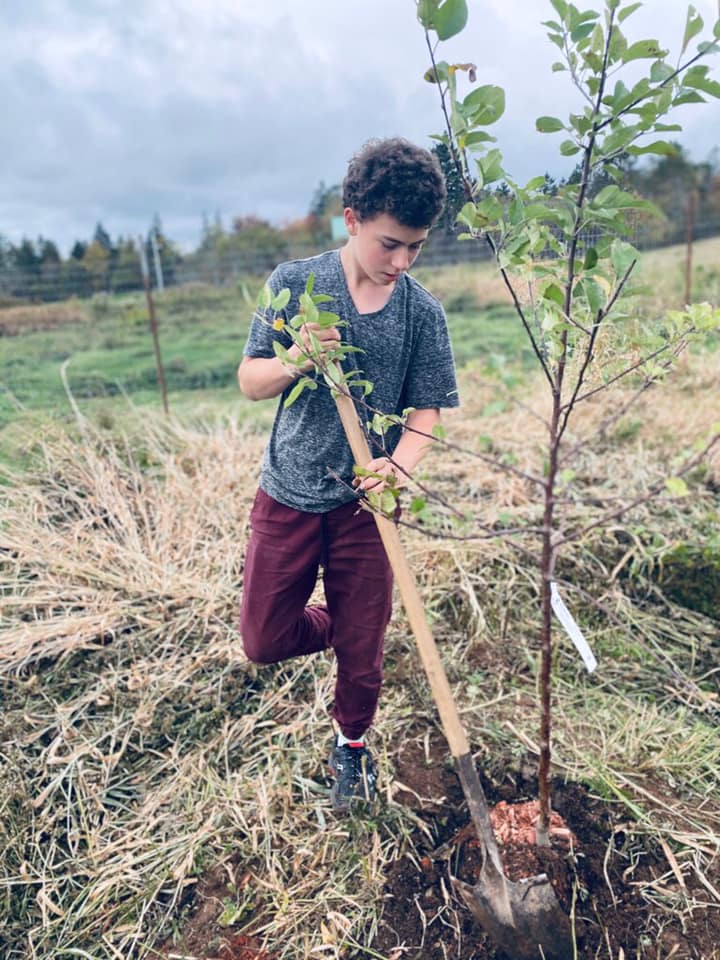 The next step taken by the TFP in collaboration with a few staff at MRHS was to try to grow some of what was now being offered in the cafeteria. We started a Garden Club in the High School and undertook the huge project of re-establishing a school garden. Multiple grants specific to school gardens made this possible. Because the bulk of gardening work happens during the school’s summer break, it was TFP volunteers who did most of the work. However, in the garden’s shoulder season when the kids were still around, they helped with planting and harvesting.

Then we took the gardening idea one step further and added another fenced in area adjacent to the garden for the beginnings of a demonstration food forest. High schoolers planted a variety of fruit trees, fruiting shrubs and vines of grape and kiwi.

For two consecutive years now, the garden has produced more than 1,000 pounds of food. Sixty percent of what is grown goes straight to the MRHS salad bar. Twenty percent is brought to two elementary schools for free salad days (one of the two elementary schools has no food service program) in which TFP volunteers prepare and serve free kid-friendly salads, and approximately twenty percent is distributed by the Musquodoboit Valley Family Resource Centre (MVFRC). 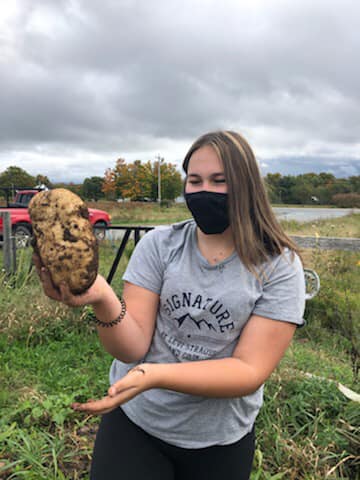 We purposely time plantings so that they are harvestable going into the school year, but of course some of what is grown matures during the school’s summer break. Hence, what needs to be eaten during the summer is given to the MVFRC to distribute to families in need. As well, to the extent we can, TFP volunteers harvest and freeze or can the produce for the school’s use when it is back in session. When food is harvestable during the school session, we often find a class or two to do the work. As well, the Healthy Living Class has expressed interest in a lesson on canning which we aim to do in Autumn 2022.

As is often the story, the pandemic took the wind out of our sails. Nova Scotia’s policy regime meant when kids were physically present in the school, volunteers were no longer allowed in. The Principal (formally Vice Principal) continued setting out food on the salad bar so that anyone who needed something to eat could help themselves at any time. However, community meals stopped, and we lost our amazing cafeteria manager. The only thing that did not slow down was the garden during the summer of 2021. We again grew over 1,000 pounds and were able to get most of it into the high school during the window of time in which it was open. As well, interest grew from area families in sharing in the harvest. Obviously, with food prices inflating to the degree that they are, food anxiety and insecurity is suddenly worse than it has been in decades. So where do we go from here?

We continue to grow food. We strategize to revitalize Community Meals in Autumn of 2022. We get the Garden Club going again. And we ask those strong young high schoolers to plant a lot more fruit trees.

Were it not for the support of the Farm to Cafeteria program, we may have felt like we lost too much ground and starting over would be overwhelming. But our shiny salad bar awaits. The garden is once again ready for planting and we have some money for seeds thanks to Farm to Cafeteria. As well, we were able to slide some speakers and a field trip into the spring schedule of the Agriculture 11 class. The kids are still happy to see us, and we are hungry to see them get their hands dirty again, be it in the garden or the kitchen.

With immense gratitude to all who make Farm to Cafeteria possible, we’ll continue the good work on and in the ground here in rural Musquodoboit Valley, Nova Scotia. 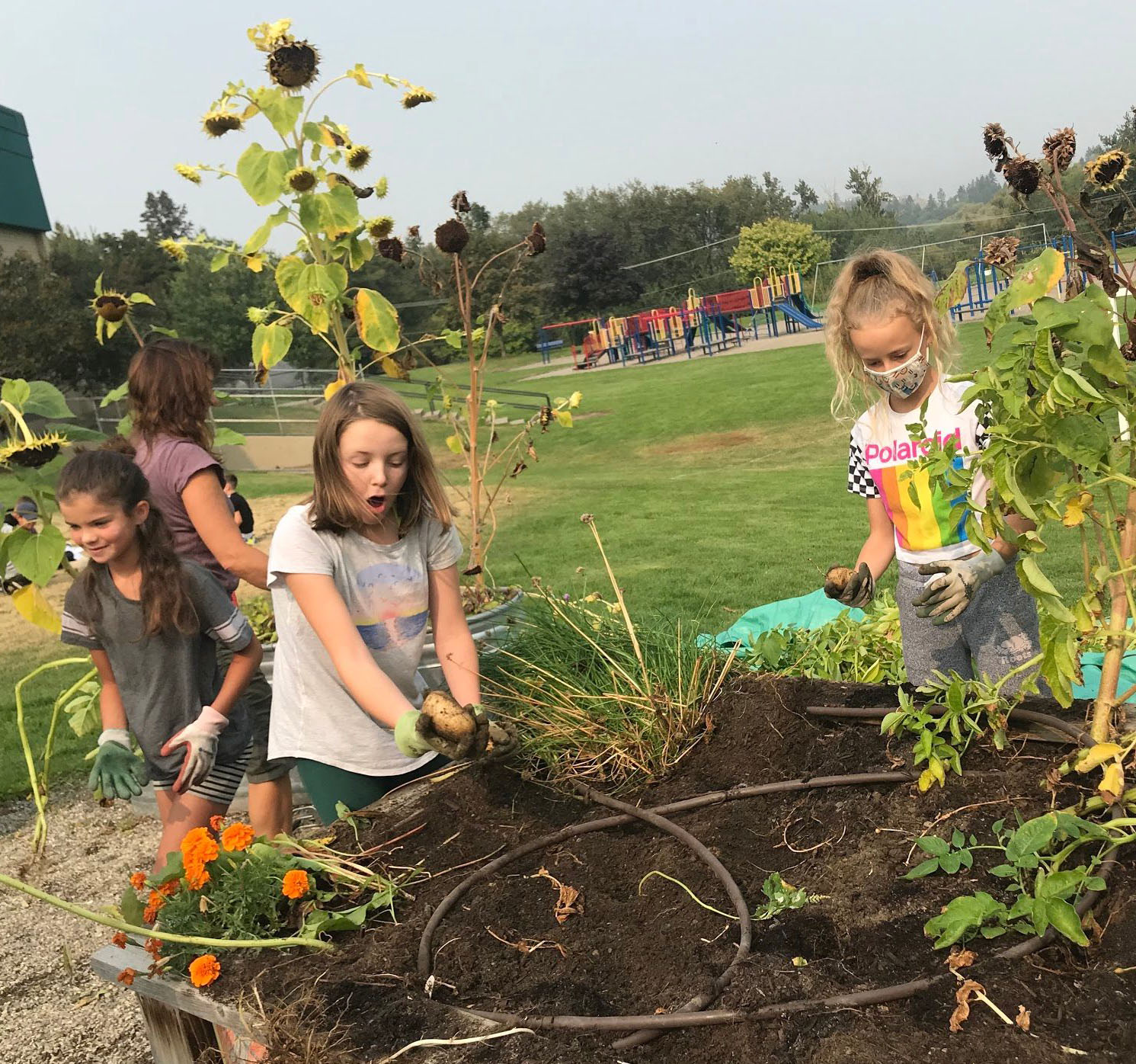