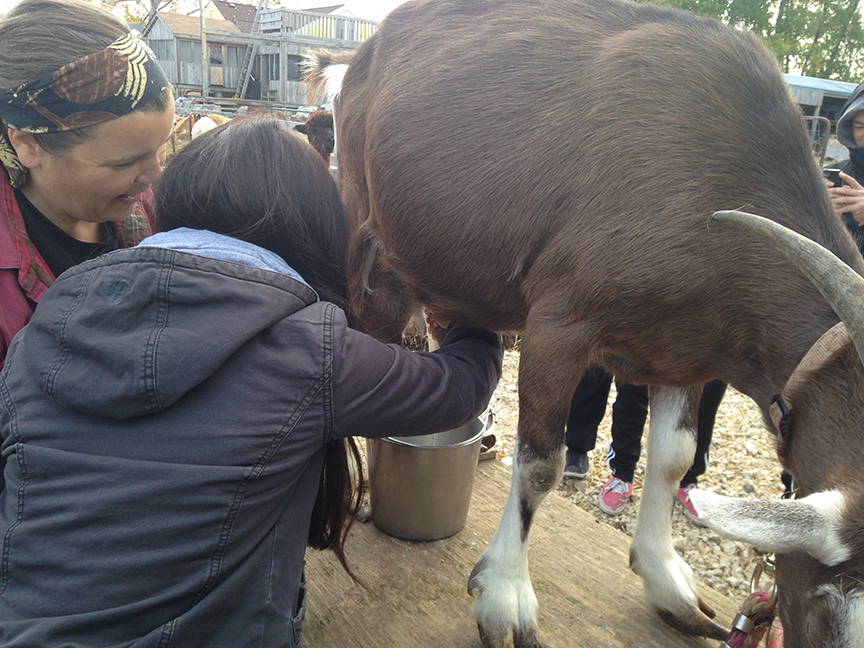 It’s not just cupcake and muffin lessons. Canadian students are making tortillas, canning the harvest, milking goats, and deboning chickens!   These skills are being taught by teachers who are part of a growing group of educators who are shaping student learning by connecting kids with local foods and farmers.

Their passion and commitment is what drives these initiatives, and they all recognize that more provincial, district and school-level supports are needed to encourage other teachers to do the same.

“The kids want to be cooking as much as possible.  And we don’t have a budget for that.” Says Lauren Sawchuk, the Home Economics teacher at Sisler High School in Winnipeg.  Sawchuk’s solution?  Cook everything from scratch.

Sawchuk’s exploration in seasonal cooking with her students began with canning during the harvest.   She met more farmers through community connections and decided she could be doing more in the classroom with other local foods too.

Sawchuk supplements the regular weekly orders and deliveries with a flour delivery the first Tuesday of the month, meat deliveries twice a month, and fresh options on Tuesday.  She then manages to receive and store her deliveries in freezers spaced around the school.  Somehow she keeps track of which freezer has that crop of peppers that they pan-fried last Fall  Managing these on-the-fly systems requires a lot of commitment and sometimes last minute dashes to the store to pick up orders that couldn’t be filled.

Fran DeRuyck, Sawchuk’s key grain grower and miller, is quick to praise Sawchuk’s work, recognizing that “it takes that teacher to go that extra mile”.

Last year, students visited DeRuyck’s farm, an hour and a half southwest of Winnipeg, and made flour and flakes for the first time.  DeRuyck appreciates that the field trips allow students to understand how much work it takes for ingredients to get to the school: “Just to see the lightbulbs come on when they see what has to happen, like growing and then harvesting and cleaning and milling.  It’s not just in the store.  It has to actually get done.”

Connecting students and farmers helps to resolve what is jokingly called ‘perimeteritis’ around Winnipeg.   DeRuyck describes that there is not much knowledge about growing food outside the perimeter of the city.  “You have to explain that a cow with horns does not necessarily mean it’s a bull.”

A similar shift in the teaching of the Foods class has taken place at Ermineskin High School in Maskwacis, Alberta. Scott Hall works with his home economics students to cook breakfast, lunch and an after school snack for 1000 students between Kindergarten and grade 12.  Similar to Sawchuk, Hall has formed relationships with local farmers, in this case the local Hutterite colony, from whom he buys grass fed beef, and his chicken and pork.

Hall’s meal program in this First Nations managed school system began as a lunch service of nothing more than toast five years ago.  It evolved into a simple lunch for the 300 junior and high school students three years ago under the direction of the previous Foods class teacher. That work inspired the school principal and the Director of Education.

With their crucial support, Hall grew the home economics program and the students’ skills.  He launched three salad bars last Fall, and plans to move forward on other key ways of connecting students with their food supply, including a food forest, an off-grid greenhouse, and yes, even chickens.

Hall reflects that our society’s perception of school cafeterias is shaped by TV shows and movies that ridicule cafeteria food and the ‘grumpy lunch ladies’.  These stereotypes teach us to think that cafeteria food will be terrible, and yet he knows his students are proving that food can be fresh, local, healthy, hand-made, affordable, AND delicious.

Andreas Zinn, a farmer just outside of Winnipeg who sells various cuts of meat to Sawchuk feels that food education should be mandatory in Elementary schools and also offered as an elective in Secondary schools.  Students could learn about food, agriculture and nutrition.

“Then once they’re older, and they’re making their own food choices, then they’re educated on it at least.  They can make their own decisions, instead of being told by the manufacturer on the health value of the food item.”

Both Sawchuk and Hall praised their supportive administration as a key reason for being able to work outside of the box.  In Sawchuk’s case, since her small Dietitians of Canada grant is over, the administration has been willing to cover the cost of the field trips this year as they recognize the educational value for the students.   For Hall, he credits the Miyo Wahkohtowin Education Board who are managing funds well, prioritizing good food, and minimizing bureaucratic hurdles.

Sawchuk suggests that beyond school and school board level support, provincial financial support for good quality, local ingredients as well as farm field trips would greatly support meeting educational, economic, and health goals.  “My classroom is supporting local producers, local farmers and it’s providing work and money and employment in my province.  Why isn’t there money to keep that work in my province?”

Initiatives like these often make sense to parents who value them from a healthy eating perspective. There are also many students who recognize the value of what they have.  Hall describes students who arrive from other schools who are amazed at the foods that are served. “We make roast beef and potato wedges.  We make chicken stock and chicken soup from scratch. It’s not cheese toast or baloney sandwiches.  They’re just blown away by what we have here and they are very thankful for it.” 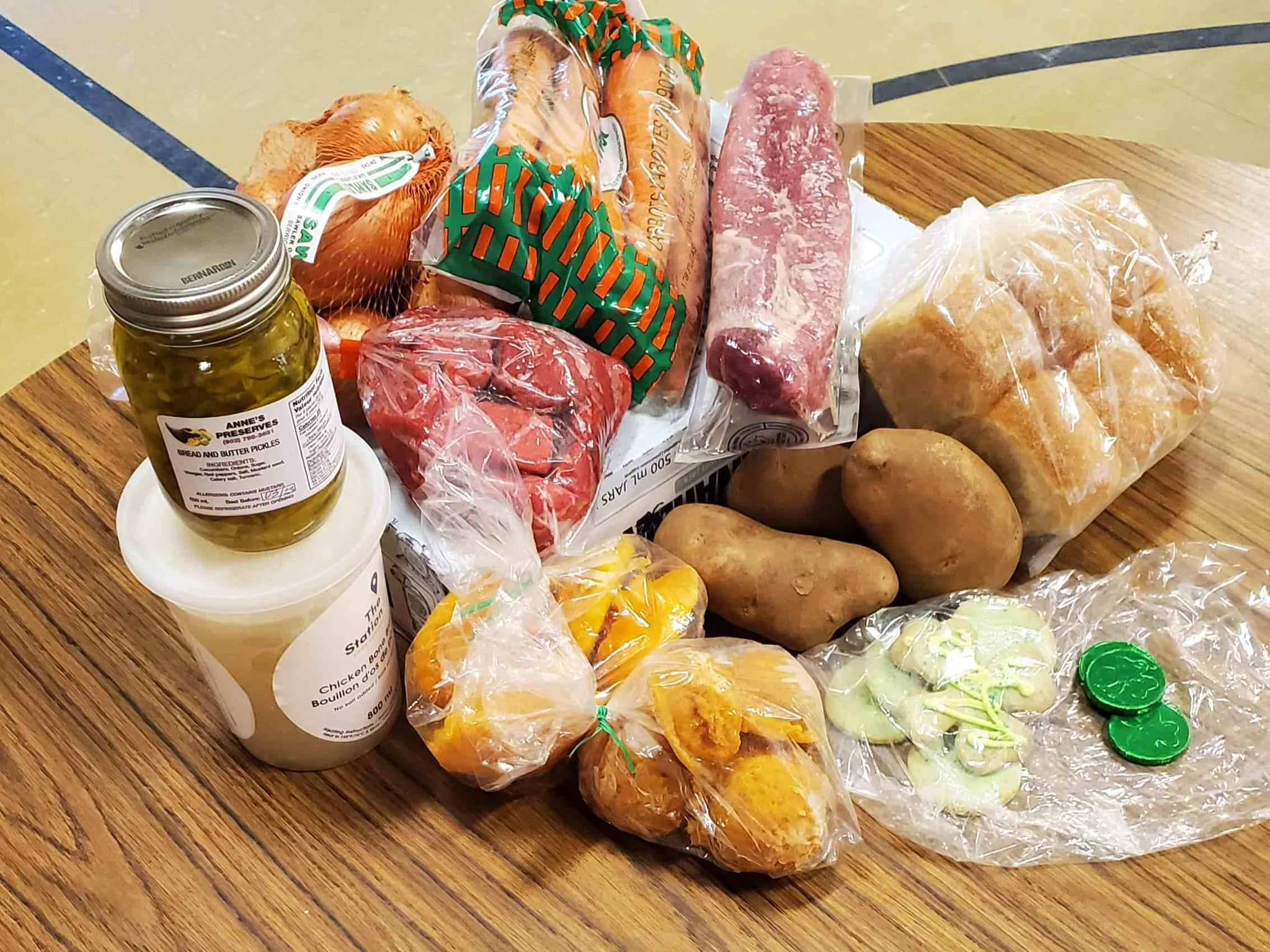 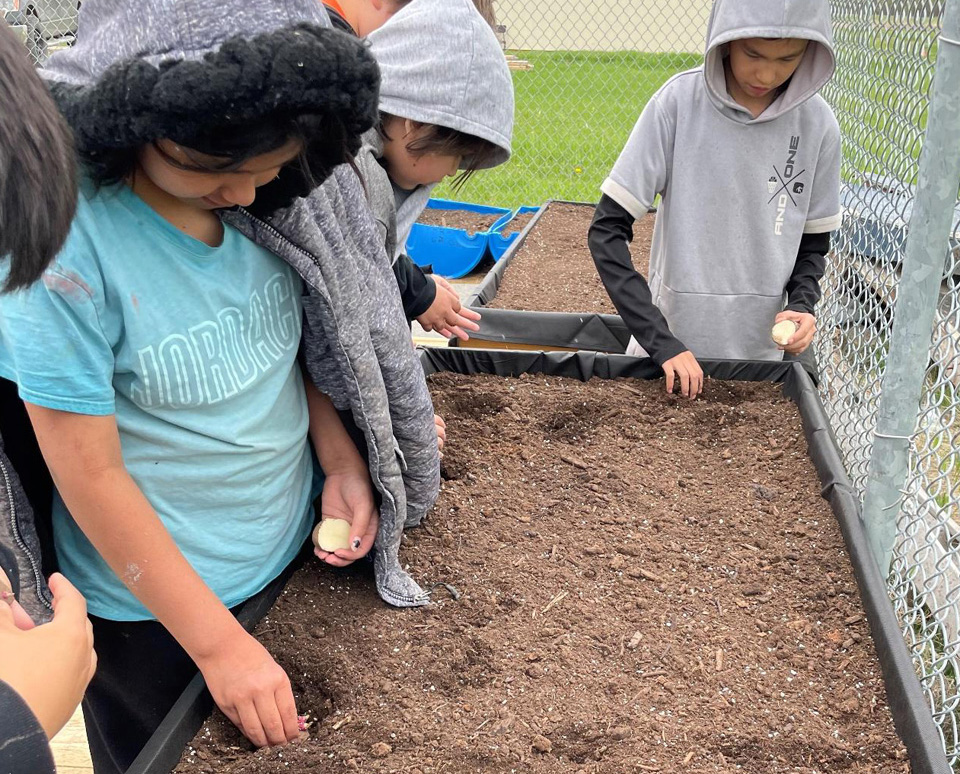 The Eastern Townships: when farms and schools become ONE